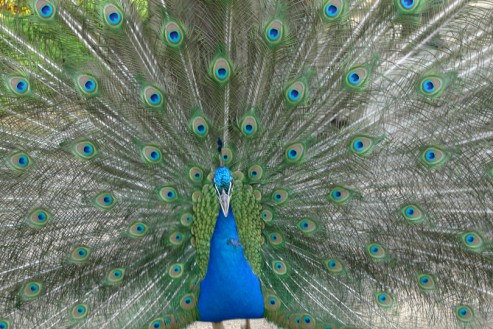 In Madrid I saw this beautiful Peacock displaying it's tail feathers - what a spectacle!

It got me hunting out images inspired by this fantastical bird.....there's just something about the combination of its extravagant display and deeply patterned iridescent blue-green-gold colours that makes for delight. The form and beauty of this 'prince of birds' has provided inspiration for artists and designers throughout history - it's plumage used to decorate homes, hats and as objet d'art - adding opulence to everyday (and not so everyday) life. 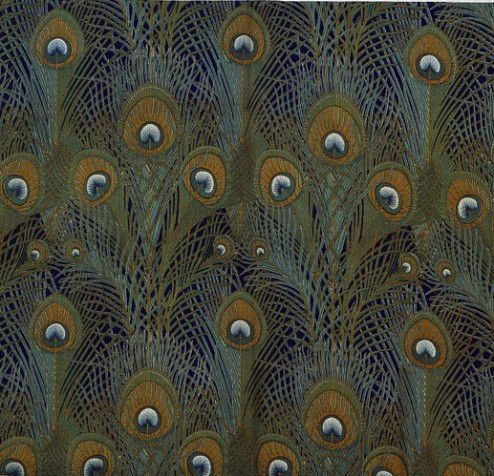 A now iconic emblem of the London shop Liberty where it was sold, this fabric opitomises the popularity of the peacock feather as a motif in the late-Victorian British Aesthetic Movement. Favouring beauty over both morality and purpose, Aesthetes drew on the inherent decorative possibilities of such a magnificently ornate bird. 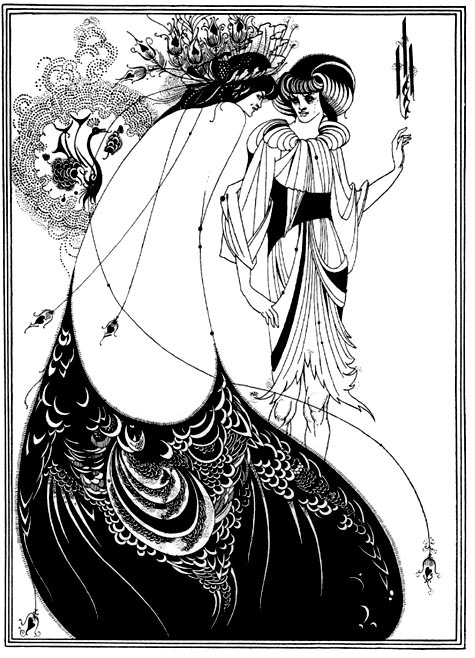 The Peacock Skirt by Aubrey Beardsley, 1894 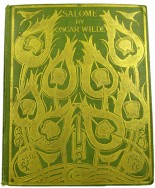 Beardsley's drawings are so intricate. His natural sense for form, line and pattern is shown in this gilt cover for Oscar Wilde's Salome, the book which contains The Peacock Skirt drawing above. He was also a leading exponent of Art Nouveau, the movement which released the graphic line and was defined by a celebration of the organic and curvilinear. I'm a big admirer of the American graphic artist Will Bradley. Whilst Mucha was being lauded in Paris and even had the style named after him for a while, he was modernising the graphic arts across the pond. 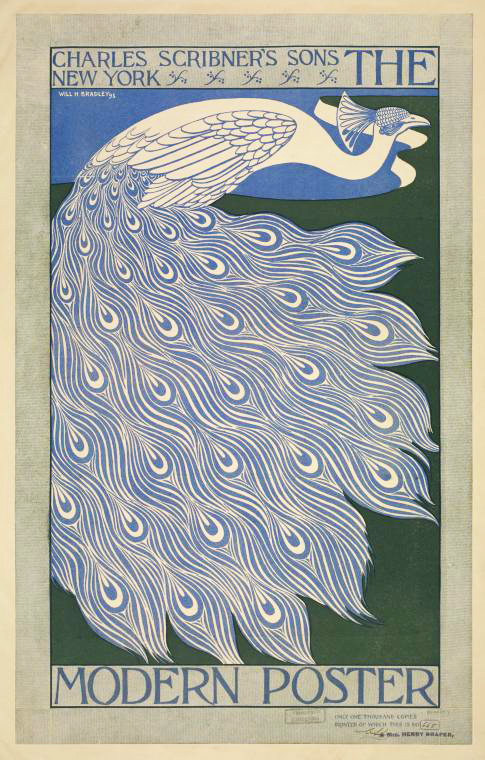 Being a bird of natural theatre, the peacock lends itself to adornment - feathered fans, headpieces, and inspiring other embellishments - even at times becoming the subject of the performance itself. This lady likes showing off her tail feathers! Ruth St. Denis in The Peacock, c.1915 © NYPL. 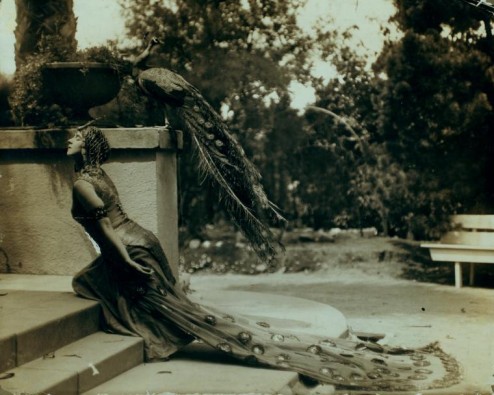 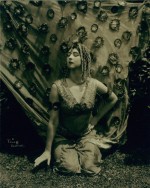 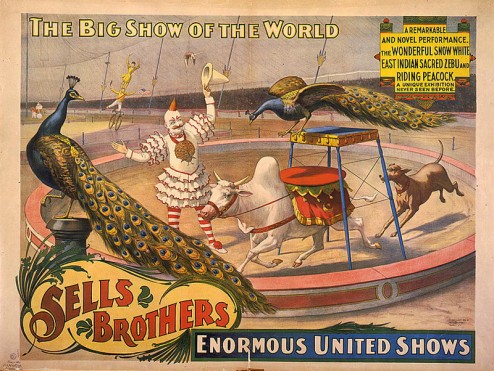 Taking centre stage in the Sells Brothers' Big Show of the World, 1895

The decadence of fin de siècle and early 20th century western culture found a natural symbol in the peacock. The huge boom in advertising heralded by the colour lithograph saw many companies adopting the bird to sell an associated air of luxury. 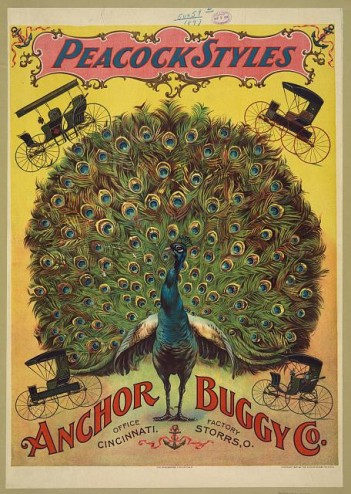 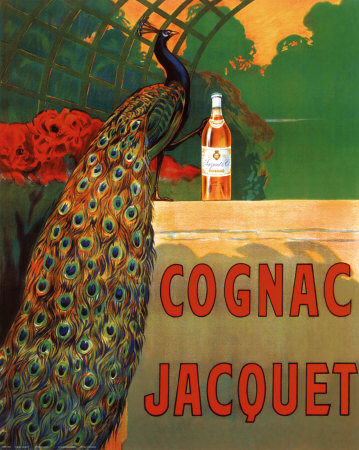 Despite being revered for it's decoration, some superstitious folk likened the design of the peacock's feather to the evil eye; hence for a time there was a widely held belief in its status as an omen of bad luck, especially when displayed inside the home. Poor peacock! But for thousands of years it had been associated with divine beings and steeped in mythological significance. Hera, the Greek queen of the gods, is said to have plucked the eyes from her giant Argus after he was slain by Hermes, placing them on the Peacocks' tail as a means to keep an eye on her philandering husband Zeus. In addition, she harnessed a pair of the birds to pull her chariot. Juno - Hera's Roman counterpart - also took the peacock as her symbol. 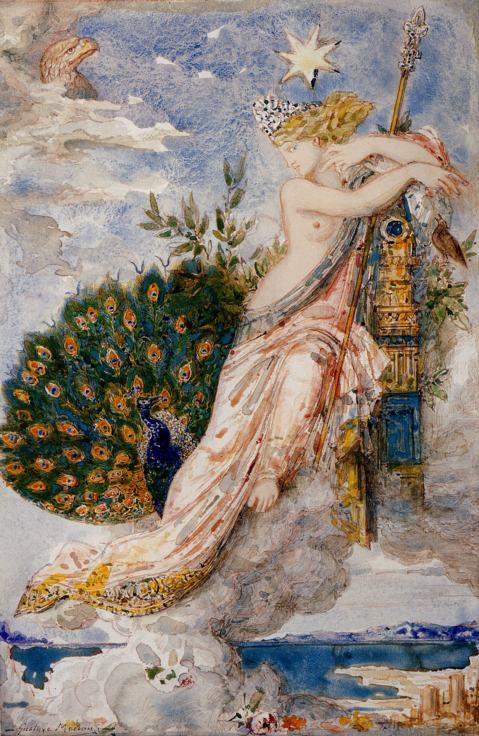 The Peacock Complaining to Juno by the French Symbolist painter Gustave Moreau, 1881-88

[pullquote foo="bar" author="Aesop"]The Peacock made complaint to Juno that, while the nightingale pleased every ear with his song, he himself no sooner opened his mouth than he became a laughingstock to all who heard him. The Goddess, to console him, said, "But you far excel in beauty and in size. The splendor of the emerald shines in your neck and you unfold a tail gorgeous with painted plumage." "But for what purpose have I," said the bird, "this dumb beauty so long as I am surpassed in song?' "The lot of each," replied Juno, "has been assigned by the will of the Fates - to thee, beauty; to the eagle, strength; to the nightingale, song; to the raven, favorable, and to the crow, unfavorable auguries. These are all contented with the endowments allotted to them."[/pullquote] 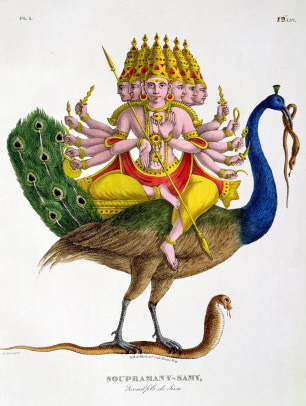 There are 2 species of peafowl, the peacock being the flamboyant male and the peahen the less showy female. The Green Peafowl Pavo Muticus is native to Java and Burma and far rarer than the Indian Peafowl Pavo Cristatus, the national bird of India. Throughout Asia it is considered extremely spiritual and auspicious. The Hindu deity Murugan - the six-headed god of war popular in the south of the sub-continent and the patron deity of Tamil Nadu - is depicted mounted upon a peacock, left.

In Buddhist mythology the female deity Mahamayuri (or Kujaku Myo-o in Japan, where she became a man) is one of the five Wisdom Kings, her very name connected with the peacock (mayur) upon which she rides. The literal translation from sanskrit is 'Peacock Wisdom Queen' and she is revered for her power to remove poisons.

I'm coming to the end of my feathered ramblings, before I go here are a few more images that have caught my eye:

I love this bold abstract Feather Wallpaper by Ferm Living: 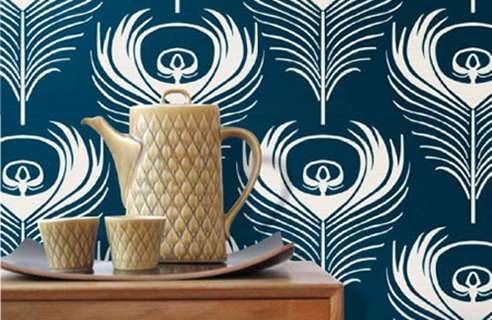 Peacock and Peahen by Maruyama Ōkyo, 1781 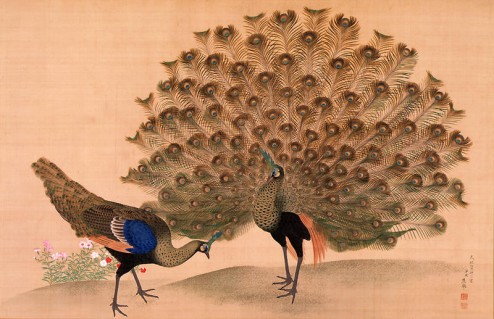 Peacock and Magpie by Edward Bawden, from The Bookroom Art Press 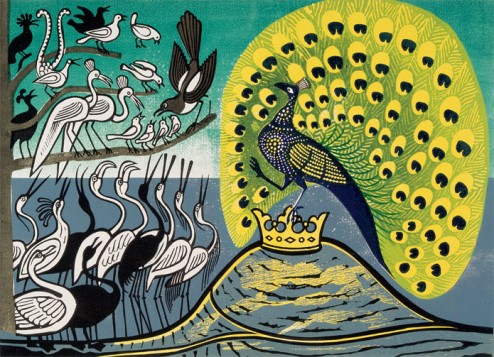 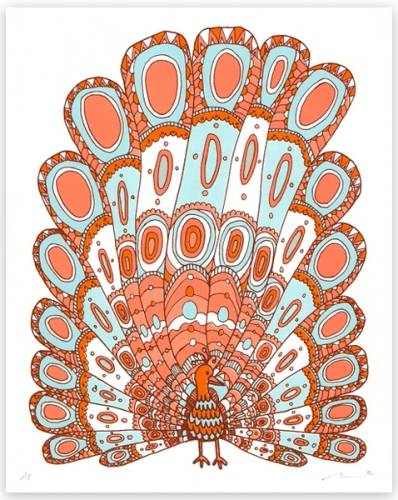